Katigondo National Seminary is in its 102nd year of existence but, according to Rev Father Dr Herman Kituuma, the rector of the seminary, the centenary celebrations will be held in 2013. It sounds a little strange that the centenary activities were not held in 2011, exactly 100 years after the seminary was established at its present location in what is today Kalungu District (in Masaka Diocese).

But this becomes easy to understand when it is remembered that the history of Katigondo Seminary actually forms a very important part of the history of the Roman Catholic Church. Not only here in Uganda but also in the entire East African region and Africa. It is the institution that turned out the first two African Roman Catholic priests in Sub-Saharan Africa, Father Basil Lumu and Father Victor Mukasa, and it is the institution that produced the first African bishop, Dr Joseph Kiwanuka.

According to the book, A History of African Priests by John Mary Waliggo, the seminary was the first institution of higher learning in the region to provide the same quality of education to Africans as that offered in the European major seminaries and universities. Many of the teachers at the seminary were indeed referred to as professors. They taught Philosophy, Theology, Canon Law, Rhetoric, Mathematics, Politeness, Church History and a whole range of other disciplines and the languages of instruction were English and Latin.

Today it takes at least eight years of studying after secondary school to be ordained a Roman Catholic Priest but even back then the priests’ training was not really any shorter. The training in the major seminary took 10 years, according to Waliggo. “Even if someone joins us today, and he already has a university degree, he still will undergo eight years of training,” Father Kituuma told this newspaper.

Katigondo was established by the White Fathers as a major seminary to take on young men who had finished their preliminary priesthood training in minor seminaries that already existed at places like Rubaga (in Kampala), Kisubi (Entebbe Road) and Bukalasa (in Masaka Diocese, some 400 meters from Katigondo).

It is indicated in Waliggo’s book: “On Sept 14, 1909 a decision was reached to separate the two seminaries and move the major to the opposite hill. Bukalasa had become rather too small and the number of major seminarians was increasing. Besides, Pope Pius X had expressed a wish that everywhere the major seminaries should be separated from the minor. Father Franco was therefore requested to start the supervision of the construction of the new buildings at Katigondo.”

Katigondo Major Seminary was officially opened on the Feast Day of St Thomas Aquinas, March 7, 1911, the saint to whom it is devoted. Just after gaining entrance into the seminary’s compound one’s attention is immediately drawn to an imposing statue of St Thomas Aquinas right in front of the chapel.

Father Franco became Katigondo Major Seminary’s first Rector and he moved there with 14 seminarians. Some of those seminarians, like Basil Lumu and Victor Womeraka Mukasa, had already advanced in their major seminary studies before leaving Bukalasa and within just three years of their stay at Katigondo, they were ready for ordination in 1913.

Some of the buildings built around that time, like the Fathers’ residence, still stand to this day according to Rev Father Francis Nnaku, the dean of studies at Katigondo. He said the building whose walls were constructed with mud and red bricks was grass thatched in those days but after some years, it underwent some face lifting and got its present roof of clay tiles.

Since then, according to Father Nnaku, some 4,000 seminarians have studied in Katigondo of whom 1,700 have been ordained priests and 27 consecrated bishops.
If at most Catholic parishes in the country good farming practices are emphasised, it could have stemmed from the training the priests underwent at the seminary. Katigondo has a 500-acre farm on which the priests and seminarians grow different crops, keep poultry, and rear pigs, goats, and cows.

Father Kituuma has an explanation for this. “The seminary has always been required to be self-reliant with regard to feeding its teaching staff and its students as well as meeting all its other financial obligations,” he offers. “In the past the seminarians did not pay tuition fees but nowadays because of reduced financial support from Rome and other sources, the seminarians are required to contribute some money for tuition and we have to work hard to generate money to sustain the institution.” 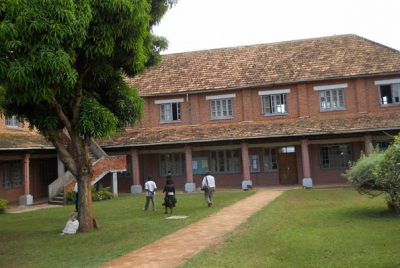 So the seminary has tractors to cultivate some 300 acres of land for growing crops like sweet potatoes, beans, maize, bananas, coffee and a variety of fruits.
Almost like in a monastery, the seminarians live a life of prayer, manual work, studying, and silence. The discipline is so strict that sometimes the seminarians may go to the fields to work in groups but may be forbidden to talk to one another during all the time they are working.

Failure to observe such simple regulations could lead to serious disciplinary action or even dismissal from the seminary. Since it is a house of formation the number of seminarians has always been kept small, which means that the Fathers have more chance to observe them and to focus more on their training. Even today given the seminary’s enormous resources, compared to other Ugandan institutions, Katigondo has only about 240 students.

How does it pay its teaching staff? One of the priests and a member of the teaching staff, Rev Father John Baptist Turinomujuni, made a most amazing reply. “But as long as we have a shelter over our heads and the bishop provides the shoes to wear, the soap to use, and the food to eat, what else do we really need?” Almost exactly what he said was once told to this writer by another priest teaching at Bukalasa Minor Seminary just a few hundred meters away only a few years back.

Since 1969, the priestly training has been spread to a few other institutions in the country. From then seminarians did not have to be at Katigondo for all the mandatory eight years of their training.

Mathias Ssenfuma of Butenga Village not far from Katigondo used to pass by the seminary every morning to attend classes at Augustine Primary School between 1944 and 1950. He recalls seeing young men believed to be very highly learned. “We were told they were taught Psychology, which enabled them to know what you are thinking even if you did not say it. So we were taught never to tell a priest lies because they could see the inside of your mind.”