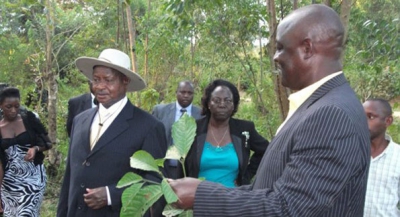 President Museveni has pledged a donation of one million coffee seedlings to enhance coffee growing efforts in Kalungu District. The President was on Tuesday launching a coffee cultivation campaign at Nunda Primary School, Lwabenge Sub-County.

“Embark on coffee cultivation as part of the efforts to ensure prosperity in your homes,” the President said in statement. The Head of State urged the locals who have four acres of land to dedicate one acre to the cultivation of coffee, bananas, fruits and elephant grass as part of the strategy to enhance household income. He also advised them to engage in the rearing of pigs and poultry.

While handing out part of the coffee seedlings provided by the Uganda Coffee Development Authority to farmers in the area, he warned the farmers intending to go into coffee growing that they should not be discouraged by long spells of dry weather which could kill the seedlings.

“Use simple drip irrigation systems such as putting plastic bottles of water at the base of each coffee seedling,” he said. Mr Museveni said poverty has persisted in the country because for too long, political leaders have not come out to support the ordinary farmer.

“Some leaders were more concerned about good roads, electricity, and schools forgetting that such things are just foundations which can be used to improve on wealth after someone has produced something to sell on the market,” the President said.

“Even if there is a good road passing by your compound and you have nothing to sell you remain poor.”
The District Chairman, Mr Emmanuel Musoke, saluted the President for spearheading the Prosperity-for-All programme for the benefit of the people.

Mr Musoke also expressed the district’s gratitude to the government for the provision of new road construction equipment. Kalungu East MP Vincent Ssempijja pledged to donate 500,000 coffee seedlings to the farmers of the area, saying Uganda is aiming at producing 10 million 60-kilogramme coffee bags per year by 2015 from the current three million bags.

During his visit, President Museveni toured the elite and clonal coffee beds, run by MP Ssempijja in Lukaya Town Council. Mr Museveni pledged to help veterans in the district to utilise the Army land in the area on lease basis in order to enhance their household incomes.